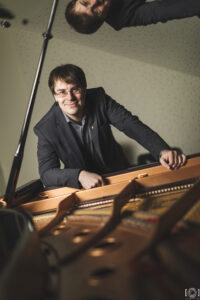 Toms Ostrovskis began piano studies at the age of 6 at Emils Darzins Secondary Music School in Latvia, actively participating and winning prizes in several competitions and festivals in Lithuania, Estonia, France, Sweden, Hungary and Japan. He graduated Jāzeps Vītols Latvian Academy of Music in 2002. During his studies he participated in many international competitions and masterclasses in Great Britain, Holland, Portugal and France, studying with various renowned artists-teachers, such as David Dubal, Joseph Banowetz, Christopher Elton, Joan Havill, Sergey Babayan, Karl Kemmerling, John O’Conor and others.

From 2002 to 2007 Toms Ostrovskis was scholarship student of Guildhall School of Music and Drama under Ronan O’Hora, where he obtained Master of Music in Music Performance Degree and an Advanced Instrumental Studies Diploma; from 2005 to 2007 he was a fellowship student and worked on his doctoral thesis, analysing advanced methods of piano teaching.

Since 2007 Toms Ostrovskis is a member of the Piano Department of Jāzeps Vītols Latvian Academy of Music. He is an active member of “Amber Coast Artists” ensemble and on regular basis participates in various solo and chamber music projects in Latvia and abroad.