CONTACTS
About The Academy History

THE BIRTH OF A HIGHER MUSIC SCHOOL

Higher music education in Estonia dates back to the latter half of the 19th century, the so-called National Awakening, during which music and theatre enthusiasts formed societies that helped establish a new Estonian-language cultural scene. The idea to create a higher music school in Estonia emerged from the ranks of the Estonia Society’s mixed choir on the eve of the First World War. It came to fruition, however, only after the war’s end, in the newly independent Republic of Estonia, in which the need for an educated class of musicians quickly became apparent.

On 17 November 1918, the Estonia Society voted in favour of establishing a higher music school. On 9 May 1919 the school’s charter was approved by the Minister of Education. The school was initially named the Tallinn Higher Music School, as the establishment of a music conservatory was not within the purview of the Estonia Society. In 1923 it was, however, renamed the Tallinn Conservatoire, which is the precursor to the present-day Estonian Academy of Music and Theatre.

The opening ceremony took place on 28 september 1919 at the Estonia Concert Hall. The academic staff consisted of 32 prominent Estonian musicians. In 1920 they were joined by a roster of professors from the St. Petersburg Conservatory, who had opted in favour of Estonian citizenship. These were pianists Artur and Theodor Lemba, the french horn player Jaan Tamm, Artur Kapp (the former director of the Astrakhan Music School) and the piano instructor Peeter Ramul from Moscow. Mihel Lüdig was the school’s director in the years 1919–1923. 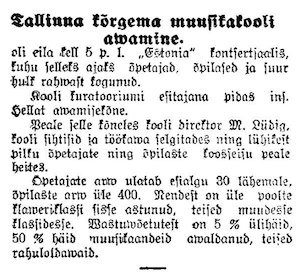 On 29 September 1919 a short notice of the opening of the Tallinn Conservatoire was printed in the newspaper Tallinna Teataja.

The academic staff of the Tallinn Higher Music School in 1919 (Photo: EAMT archives)

Between 1923 and 1933 the school’s director was Jaan Tamm, who founded the Conservatoire Society, which took over the institution from the Estonia Society. Under Tamm’s direction the Conservatoire achieved both academic and financial stability. He had later stated that at this early stage of development, the primary objective was to focus as much energy and resources on improving the school’s pedagogy and artistic standards. Academic staff paid visits to established conservatories throughout Europe, participated in music conferences and became acquainted with new teaching methods. Numerous public student concerts were organized, which quickly breathed new life into the local music scene.

After his death in 1933, Jaan Tamm was replaced by composer and conductor Juhan Aavik as director of the conservatoire, under whose leadership the school became nationalized in 1935.

At the initiative of Mihkel Lüdig, the first director of the conservatoire, donations were collected to support the construction of a new school building. Located between the town wall and St. John’s Church (which itself was undergoing a lengthy reconstruction), this became a modern and comfortable building for the higher music school. However, the school’s needs quickly outgrew the facility, which gave rise to a century-long headache: the lack of space.

The building of the Tallinn Higher Music School completed by 1922 (on the right), viewed from St. John’s Church. The spire of St. Nicholas’ Church visible in the background. Photograph by: August Vannas (Photo: Estonian Theatre and Music Museum, MO251:1)

…As of 1934, all of the 234 musicians from the various disciplines have found work throughout the country. They are contributing to the rapid development of our nation’s musical culture, as church organists, choirmasters, conductors, music teachers, private tutors, soloists, members of the orchestra and spokespersons…  [Anton Kasemets Eesti muusika arenemislugu (History of the Development of Estonian Music, 1937)].

The school continued to operate during the war. Despite the endless difficulties, the school, under the leadership of Riho Päts, managed to attract new academic staff to its ranks. These prominent musicians included Heino Eller, Karl Leichter, Tuudur Vettik, Bruno Lukk, Cyrillus Kreek and Arno Niitof.

By September 1940, the school was required to transition to the Soviet curriculum, which brought about extensive changes in staffing and structuring. Musicians were not spared from forced mobilizations and evacuations, which made it very difficult to continue the activities of the school.

Temporary shelter for the school was found in the Lahmuse manor house, near Suure-Jaani.

During the bombing of Tallinn on 9 March 1944, the school and its contents were all but destroyed. When restoration began in autumn of that year, the school was facing a situation not entirely unlike its founding a quarter-century earlier: lacking both a building and instruments. For a long time after the bombing the school operated from Kaarli pst 3, a residential building not far from the site of the destroyed campus. Vladimir Alumäe became director of the conservatoire.

The war had a devastating impact on the country, and its music community was not spared. Many leading members of the cultural elite had left Estonia as refugees; others were evacuated to the east. In spite of all this the conservatoire survived. A sense of continuity with the pre-war institution was maintained thanks in large part to the older professors, which contributed to the pervading spirit of resilience. While the future remained unpredictable, the students and staff drew on the spirit of their predecessors and continued the work of the school. However, the forced optimism imposed by the regime did nothing to alleviate the sincere feelings of entrapment and gloom felt by most, if not all.

Political repressions intensified in 1948, when the government implemented a new cultural policy that saw the arrest and dismissal of large numbers of professors. The new system of higher education emphasized the importance of research, which was required of all academic staff. However, postgraduate studies were not launched at the conservatoire, which meant that it was not possible to defend dissertations in the Estonian language. Throughout the entire Soviet period, the school remained a dependent on Moscow and Leningrad in academic affairs. In 1952 the composer Eugen Kapp was appointed director of the conservatoire. From the mid-1950s the creative atmosphere began to gradually thaw.

Tuudur Vettik on his 50th birthday, 4 January 1948, at the Estonia Concert Hall with the mixed choir of the conservatoire (Photo: Estonian Theatre and Music Museum, M347:1/171:3)

In 1957 the Faculty of Performing Arts (later known as the Drama Department) was founded with the mission of training forthcoming generations of actors. This was spearheaded by Voldemar Panso, who was the school’s first director. For many decades most Estonian actors and directors have studied at the theatre faculty.

Voldemar Panso, … True, acting is one of the most time-consuming skills, and practical experience plays a more important role here than in some other arts, because the creator and the instrument are one and the same person. With all this in mind, we have to be very clear about who exactly steps off the school stage and onto the theatre stage? – It’s a young actor. An a c t o r! The school must make of him an actor. As an actor, he is received by the theatre and the audience. His youth must be a virtue, not a concession… (Voldemar Panso. Töö ja talent näitleja loomingus. (Work and talent in an actor’s creative life.) Tallinn Eesti Raamat 1965, p. 15)

In 1964 when Vladimir Alumäe began his final term as rector, a general sense of political thaw began to be detected by many, although this turned out to be largely deceptive. While the conservatoire’s importance and prestige expanded, its practical realization was hampered by the lack of space, which was quickly becoming unbearable. Rector Alumäe began the process of looking for new facilities, becoming acquainted with many potential sites around Tallinn.

Students kept their spirits up by founding a musicology club, which organized conferences which were dubbed “scientific sessions”. These conferences provided a forum for discussion on concert life. The society’s members brought forth bold ideas and had a major influence on the music scene.

In the 1971/72 academic year the school finally moved to a new campus at the former boarding school at Kivimäe, on the outskirts of the city. While the facilities may not have been the most practical for music studies, Kivimäe’s peaceful environs proved an idyllic place for young, aspiring musicians.

Heljo Sepp, the Vice Rector at the time, described the early years of the Kivimäe period, … The staff managed to do everything, one step at a time. The main thing was that everyone understood that it was necessary, and waited patiently for any shortcomings to be dealt with. At the same time, a lot of repair work was being done, a new boiler house was being built, the book and sheet music collections were set up, and the sound system of the office was being planned. The surroundings of the school building were tidied up and landscaped, the canteen became operational, the exterior of the school buildings was finished, and gradually, the classrooms and the dormitory were furnished … [Eesti Muusika- ja Teatriakadeemia 100 (The Estonian Academy of Music and Theatre 100), p. 97]

Vabaduse puiestee 130 at Kivimäe. For nearly 30 years, students would drive between these buildings and the city centre, as the conservatoire continued to operate simultaneously also in the building on Kaarli (then Suvorov) puiestee, with the Drama School at Toompea. (Photo: Mati Hiis, EAMT archives)

The attitudes prevalent in the 1970s were in stark contrast to the experimental and daring 1960s. The new era of stagnation was echoed in a general demeanor of careful self-reflection and yearning for past traditions. From 1971 it was again possible to major in music pedagogy, thereby strengthening the role of the conservatoire as the primary support structure for all levels of education.

In the 1970s the first graduates of the Tallinn Music High School (established in 1961) entered the academy. The vigorous training they received in their previous schooling contributed to a dramatic rise in competence, artistry and overall caliber of the conservatoire. The level of the school’s orchestra continued to rise, and they gradually increased the number of concerts they gave each year. By 1979 the orchestra gave three full-length concerts a year in addition to the academic work specified in the curriculum.

To this day the Drama Department bases its methods on Estonian traditions and the Stanislavski school. Panso had long advocated that not only actors but also directors deserved professional training from within the school. His efforts bore their first fruit in the graduating class of 1976, which coincided with his final year of teaching. The so-called “Panso era” came to a close in the late 1970s.

FROM CONSERVATORY TO ACADEMY

In the 1980s, as the stifling political climate began to ease, the conservatoire was able to execute authority over its own affairs. Its official name, the “Tallinn State Conservatoire” was changed to the “Tallinn Conservatoire”. In 1993 it was renamed the “Estonian Academy of Music”.

Choral conductor Venno Laul, rector from 1982–1992, campaigned for a new building, but this became a reality during the tenure of the subsequent rector, pianist Peep Lassmann. Lassmann was rector from 1992–2017, during which the academy became a modern, state-of-the-art facility for post-secondary music education.

The academy became an accredited university, with presently offers three-year Bachelor’s and two-year Master’s degree programmes. A four-year doctoral programme was established in 1996, which initially was only open to musicologists. This was expanded to the creative fields (performance and composition) in 2000.

In 2017 eminent pianist and pedagogue Ivari Ilja became the new rector, whose ambition is to  expand the presence and influence of the academy within society.

In 2019 the long-awaited concert hall was completed, giving the academy a state-of-the-art performance facility.

Today the Estonian Academy of Music and Theatre is an internationally recognized institution of music education and research. The vast majority of Estonian musicians and theatre people have either studied or taught at the academy, making it a pillar of Estonian cultural life.