Today, on 7th of April 2018 the cornerstone was laid for the Estonian Academy of Music and Theatre’s (EAMT) new concert hall complex, which will feature a main hall with a capacity of 480 people, a blackbox theatre seating 130, and 21 new classrooms. The state of the art building that costs nearly 12 million euros will be ready by EAMT’s centenary next September.

The participants in the afternoon ceremony today were Minister of Education and Culture Mailis Reps, Minister of Culture Indrek Saar and the Academy Rector, Professor Ivari Ilja. For posterity, a time capsule emblazoned with the EAMT logo was installed in the cornerstone. The contents of the metal cylinder are: daily newspapers with today’s date, the blueprints of the new building, a silver postage stamp and souvenir coins of the country’s centenary and a tuning fork.

Minister of Education and Research Mailis Reps called the occasion a chance to rejoice for the school community and all music aficionados as well as the general public, because the new building will feature the concert hall with the best acoustics and the most up to date technology in Estonia.“I hope that the creative muse will find its way to this building too and inspire students in their studies and performers at concerts,” said Reps.

“The new building and the significantly broader possibilities for provision of education represent the start of a new chapter in the history of EAMT. It is very important for Estonian musical culture that the reach of international projects and research is broadening, the academy will make it on to the world educational map as an even more powerful symbol, appealing to music students and teachers across the world,” said Minister of Culture Indrek Saar.

The Rector of EAMT, prof. Ivari Ilja said he was pleased that after 20 years of patient waiting the conservatory would finally get its own concert hall, which was not built concurrently with the academic complex. “The state of the art complex to be completed for the academy’s centenary is indispensable for future top-level musicians and actors, allowing them, without leaving their alma mater, to gain as direct an experience as possible on the big stage, to be able to master acoustic particularities, to feel the heat of the klieg lights,” emphasised Ilja.“There is no concert hall with nearly 500 seats in Tallinn; so the new building will fill that gap as well.The complex is also good news for theatre-goers, because the EAMT symphony orchestra, top musicians from home and abroad, actors and directors, academy teaching staff and doyens of the international music scene teaching master classes in Tallinn will also use the performance venues.”

The central part of the 6,100-square-metre building will be the 480-seat concert hall, which is four storeys high from floor to ceiling and is best suited for classical music, although other musical styles will also find a home here. The 130-seat black box theatre rises three storeys and will be used by drama students and jazz musicians. The five-storey building with a lookout basement level will house 21 classrooms, including a multimedia studio and jazz lab.

EAMT Administrative Director Ott Maaten says all levels of the complex will be connected to the main building next door. “The concert hall with two balconies is the most important and biggest space and is located in the middle of the building. It can be accessed from the main building and also has a separate entrance from Sakala Street, so that the hall could be used flexibly for both teaching activity and events,” said Maaten. “The hall complex will be stylistically similar to the EAMT main building and the interior design will follow the conservative aesthetics of the building, characterised by dominant use of natural materials and primary colours. As this will be Estonia’s newest concert venue, the acoustics take into account the experiences of all previous concert halls.”

The EAMT concert hall complex was engineered by AS Resand. The architects were Toivo Tammik and Mart Rõuk from the architectural design office Ansambel, and the interior architecture in the performance venues is by Aivar Oja from FraDisain OÜ. The acoustics project is by Linda Madalik in collaboration with the Danish acoustics office of Gade&Mortensen Akustik. Construction will be performed by Nordlin Ehitus AS and the owner’s supervision will be carried out by Tallinna Linnaehituse AS. The construction of the complex is being funded by the Cultural Endowment of Estonia, the European Regional Development Fund and EMTA. 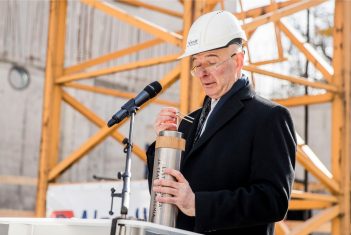