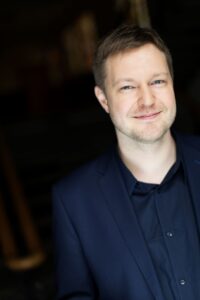 Guntis Kuzma graduated from the clarinet class of Professor Sigurds Circenis at the Latvian Academy of Music and has later perfected his professional skills in the master classes by Eduard Brunner and Bruno di Girolamo. He also completed a term at the Stockholm Royal Academy of Music under the guidance of Kjell-Inge Stevenson. Kuzma is the winner of a number of international contests, including the 2003 International Clarinet Association Young Artist Competition in Salt Lake City (USA) and the 2001 Eduards Mednis Young Clarinet Player International Contest (Latvia). Guntis Kuzma has appeared in concerts in USA, Denmark, Estonia, Latvia, Lithuania, Ukraine, Germany and Sweden.

The most important place in his repertoire is held by contemporary music. Kuzma performs both as a solo artist and a member of various chamber ensembles and orchestras; he has also studied conducting with Andris Vecumnieks. Previously part of the Riga Chamber Musicians orchestra, Kuzma is a member of the Latvian National Symphony Orchestra since 2002, holding the post of Principal Clarinet Player at LNSO (from 2008) and the Sinfonietta Rīga Chamber Orchestra (from 2007). In 2005 Kuzma played the clarinet solo part at the premiere of Concertino for Clarinet and String Orchestra by Alvils Altmanis, also taking part in the first performances of Concerto for Clarinet with Orchestra by Mārīte Dombrovska and a number of pieces by Rolands Kronlaks.