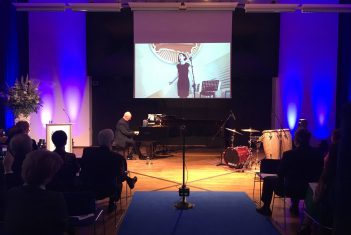 The Estonian Academy of Music and Theatre is the first in Estonia to use the unique LoLa (low latency) technology tool that enables real time musical performances where musicians are physically located in remote sites (up to 4000 km) connected by advanced network services with no significant distortion or delay.

LoLa was introduced in a concert “Music without Borders” on 5 October that served as an introduction to the 2nd Eastern Partnership Ministerial Meeting on Digital Economy featuring top musicians from Tallinn and Minsk, Belarus, who performed together in real time. Among them were Rector of the EAMT, pianist Ivari Ilja, Vice-Rector of the EAMT, cellist Henry-David Varema, jazz pianist Kirke Karja and singer Laura Põldvere. The Estonian musicians were joined in Minsk by a number of Belarusian and Georgian musicians such as renowned jazz saxophonist Reso Kiknadze, Rector of Tbilisi State Conservatory.

Even though introduced first time in Estonia, the LoLa technology has been in use in many music schools in Europe, the US and elsewhere for teaching, master classes, rehearsals and performances since its first public demonstration in 2010. It is now available in Eastern Partnership countries thanks to the EaPConnect project that sets out to create a regional research and education network in Eastern Europe and the Southern Caucasus with the objective to decrease the digital divide, improve intra-regional connectivity and facilitate participation of local scientists, students and academics in global research and education collaborations. EaPConnect is managed by the networking organisation GÉANT in collaboration with the national research and education networks in the six beneficiary partner countries (Armenia, Azerbaijan, Belarus, Georgia, Moldova and Ukraine), and includes associate partners from other world regions.

The LoLa project research and development team is a collaboration between Conservtorio di Musica G. Tartini, Trieste, and the Italian research and academic network GARR. The idea of LoLa was conceived in 2005 and was commended by the international research and education networking community with GÉANT Community Award in 2017.