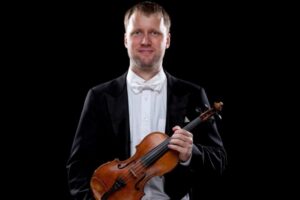 Sandis Šteinbergs studied violin at the Emīls Dārziņš Music School with Romans Šnē, following up with chamber music studies at the Sibelius Music Academy in Helsinki and JVLMA (master class with Jānis Maļeckis). His career as a musician started in 1991 when he became the concertmaster of the Riga Chamber Players. He has been assistant concertmaster of the World Youth Symphony Orchestra and participant in the Gustav Mahler Orchestra concerts in 1997. An active chamber musician, he is a part of the by now almost legendary RIX Piano Quartet.

He is a recipient of the Latvian Grand Music Award 2004 (for brilliant solo work) and 2012 (in the category “For brilliant ensemble work”).